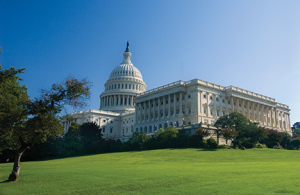 In late March, the NJ REALTORS® Leadership Team, accompanied by staff from the Government Affairs department, visited Washington, D.C. for a series of key meetings with members of Congress.

Briefed prior to the meetings by NAR’s federal policy advisors on real estate issues of high importance, NJ REALTORS® spoke with the delegates on issues critical to REALTORS® and private property owners.

Some of the key topics discussed included:

Without meaningful patent litigation reform, REALTORS® and other business owners will remain targets of extortion. This issue affects about 60% of small-to-mid sized businesses. NJ REALTORS® called upon members of Congress to support H.R. 009, which requires that demand letters provide more specificity of the basis of the alleged infringement.

Preserving 1031 Like-Kind Exchanges NJ REALTORS® met with members of Congress to provide education on 1031 like-kind exchanges that allow an individual selling a business or property to postpone paying tax on the gain if they reinvest the proceeds in similar property as part of a qualifying like-kind exchange. Gain deferred in a like-kind exchange is a deferral of tax, not an exemption, and these are key to the growth and health of our economy, including the real estate sector. NAR supports investors’ ability to utilize tax-deferred like-kind exchanges and would oppose any legislation that would repeal or limit them for real estate.

Preserve MID and Property Tax Deductions In NJ REALTORS®’ meetings with members of Congress, the need for continued support of the Mortgage Interest Deduction and other property tax deductions was reiterated. NAR opposes any effort to reduce, limit, or impose rules that would reduce the tax and economic benefits the MID provides.

3% Cap Dodd-Frank provides that a Qualified Mortgage may not have points and fees in excess of 3% of the loan amount. A 2014 NAR survey of affiliated mortgage lenders revealed that almost half experienced problems due to the 3% cap, and in almost half of those instances, consumers either were not able to complete the transaction or not able to complete the transactions with their preferred settlement services provider.

Companies reported that borrowers were forced to use outside title simply because state law fixed the rates of title and it was impossible to adjust the rate to comply with the 3% cap. NAR wants to level the playing field for affiliated and unaffiliated, and we requested that our members of congress support the Mortgage Choice Act.

NJ REALTORS® looks forward to working with members of the New Jersey delegation in May at our annual Midyear Hill Visits.