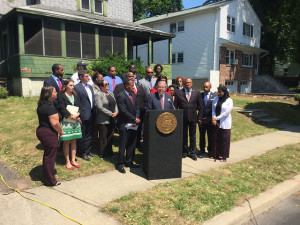 EAST ORANGE, NJ (June 24) – U.S. Senator Bob Menendez today unveiled federal legislation that takes aim at zombie homes that plague New Jersey communities and drive down property values.  New Jersey had the highest foreclosure rate in the nation in 2015 with over 35,000 filings and a recent report found the state has the most vacant zombie foreclosures in the nation with over 4,000.

“Zombie foreclosures threaten our communities and scare away new homebuyers and investors, which leads to neighborhood blight and plummeting values of surrounding properties,” said Sen. Menendez, Ranking Member of the Senate’s Subcommittee on Housing, Transportation, and Community Development.  “We need to do all we can to keep families in their homes and ensure mortgage lenders are invested in the communities they serve.  This legislation stands up for New Jersey’s struggling homeowners, and prevents the banks from turning their backs on borrowers, on their neighbors, and on the community at large.”

Sen. Menendez was joined by housing advocates and local officials outside a zombie home in East Orange to announce the legislation.  East Orange has taken aggressive action within its municipal authority to tackle the blight of zombie homes and abandoned properties harming communities.

“Our neighbors and neighborhoods are still trying to recover from the foreclosure crisis and the outbreak of zombie foreclosures that have menaced our communities,” said Staci Berger, president and chief executive officer of the Housing and Community Development Network of New Jersey.  “Zombie properties are a drag on our economy and a danger to our neighborhoods. We applaud Senator Menendez for his leadership on this issue by introducing policies that would help our communities fight back.”

“I commend Sen. Menendez for introducing this bill addressing one of New Jersey’s biggest foreclosure-related problems — so-called zombie foreclosures, or vacant properties stuck somewhere in the foreclosure process,” said Seton Hall University School of Law Professor Linda Fisher.  “New Jersey retains the dubious distinction of having the highest number of zombie foreclosures in the nation — estimated at over 4,000.  This is partly the result of lenders having little incentive to complete foreclosures when property values are low.  This bill, however, puts the onus on lenders to notify homeowners of their rights and obligations and to notify towns of the status of the home.  When homeowners know who’s responsible, they can actually be responsive, preventing homes from disrepair and borrowers from surprise charges on a home they thought they no longer even owned.”

In January, Sen. Menendez hosted a roundtable discussion in his Newark office with representatives from organizations including the Housing and Community Development Network of New Jersey, the New Jersey Bankers Association and the New Jersey Realtors to develop solutions for dealing with the state’s foreclosure crisis.

Last year, he led a letter to the federal housing and banking regulations, including Department of Housing and Urban Development Secretary Julian Castro and Federal Reserve Chair Janet Yellen about the zombie foreclosure situation in New Jersey and introduced the Preserving American Homeownership Act, that would provide relief to underwater homeowners by creating a program in which banks could reduce the mortgage principal for eligible homeowners and in exchange be entitled to a portion of any increase in the value of the home down the road.